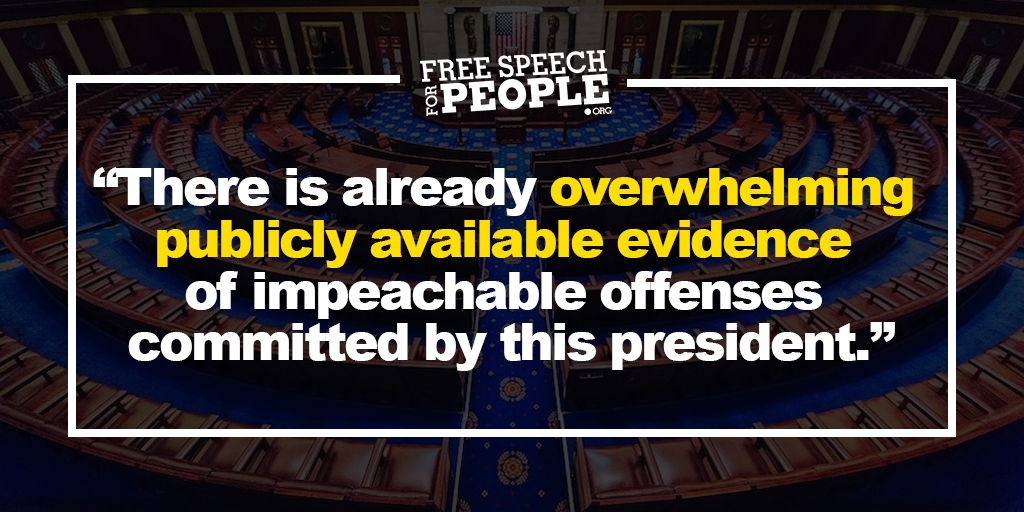 The letter details a procedural path for Rep. Steve Cohen and Rep. Jamie Raskin to begin an impeachment inquiry without further action by the full House or full Committee on the Judiciary.

WASHINGTON, D.C. (July 18, 2019) — A coalition of national advocacy organizations delivered a letter to Reps. Steve Cohen (TN) and Jamie Raskin (MD), respectively Chair and Vice Chair of the House Judiciary Committee’s Subcommittee on the Constitution, Civil Rights and Civil Liberties, urging them to begin an impeachment inquiry against President Trump.

The letter argues that the subcommittee may use California Rep. Brad Sherman’s H. Res. 13 (“Impeaching Donald John Trump, President of the United States, for high crimes and misdemeanors”) to begin an impeachment inquiry without prior approval from House Speaker Nancy Pelosi or the other members of the House of Representatives. The February 2019 referral of the resolution empowers the subcommittee to conduct a full impeachment investigation, including to meet, hold hearings, issue subpoenas, receive evidence, consider amendments to the resolution, and submit recommendations to the full Committee as to whether impeachment is warranted.

“There is already overwhelming publicly available evidence of impeachable offenses committed by this president, including obstruction of the administration of justice, accepting unconstitutional emoluments from foreign governments, abuse of emergency powers, and others,” the letter reads. “In the face of this evidence and the ongoing dangers posed by this president, Congress has a constitutional duty to begin an impeachment inquiry and that inquiry should begin now in your subcommittee.”

The letter was authored by attorneys at Free Speech For People, and organizational signatories of the letter include: Free Speech For People, By the People, Common Defense, Courage Campaign, CREDO Action, Democracy for America, Lawyers for Good Government, Mainers for Accountable Leadership, March for Truth, MoveOn, Progressive Democrats of America, Revolving Door Project, and Women’s March.