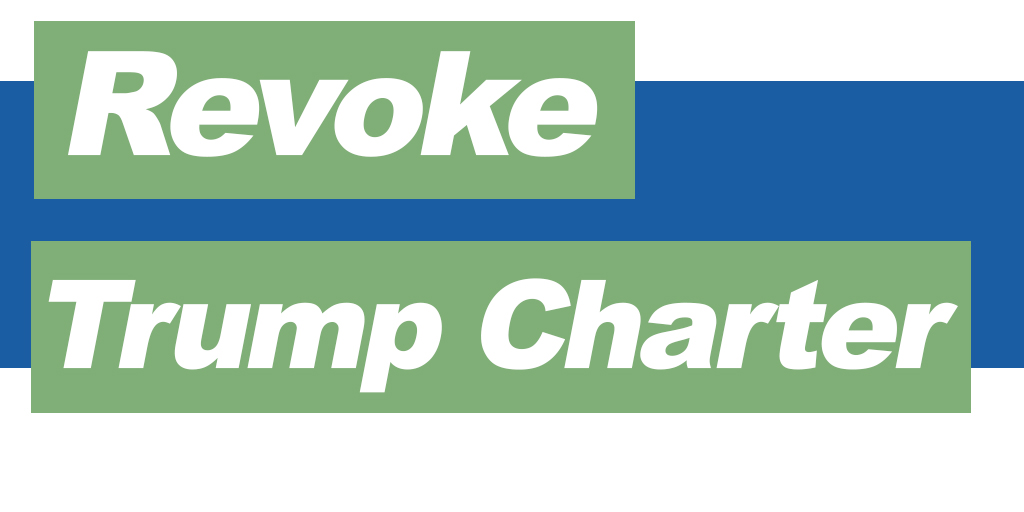 (NEW YORK, NY) – Free Speech For People (FSFP), a non-partisan legal advocacy organization, delivered today a letter to New York Attorney General Letitia James, calling for an investigation into whether to revoke the corporate charter of the Trump Organization under a New York law that authorizes her to dissolve a corporation for persistently illegal conduct or abuse of its powers. These alleged activities, detailed in the letter and in previous correspondence, include money laundering, tax evasion, fraud, facilitating unconstitutional foreign government payments (emoluments) to the president, helping Iran’s Revolutionary Guard evade international sanctions, and concealing a political slush fund by invoicing bogus “legal services.”

“For too long, the Trump Organization has acted as if following the law is only for suckers. The Trump Organization’s corruption and impunity need to end now. The New York attorney general should use her legal authority to file a lawsuit to dissolve the company and revoke its corporate charter,” said Ron Fein, Legal Director for Free Speech For People.

“The Trump Organization has served as Donald Trump’s criminal enterprise for decades and in the last several years has been used by Trump to help illegally secure the presidency through an unlawful campaign finance hush money scheme, and to turn the presidency into a profiteering venture for Trump and his family through a continuous course of corrupt dealings and violations of the constitutional emoluments clauses.  The use of the Trump Organization to facilitate this criminality and corruption is contrary to New York law and it is incumbent on the Attorney General to investigate and take appropriate action,” said Ben Clements, Free Speech For People Board Chair, partner in the Boston law firm of Clements & Pineault, former federal prosecutor, and former Chief Legal Counsel to Massachusetts Governor Deval Patrick.

“The integrity of our democracy and public institutions are at risk,” said Jonathan Abady, co-counsel on Free Speech For People’s letters issued today and a founding partner of Emery Celli Brinckerhoff & Abady. “The overwhelming evidence of criminal conduct involving the Trump Organization demands an immediate and thorough investigation by the New York attorney general.”

“The New York Business Corporation Law is quite clear,” said Jennifer Taub, Professor of Law at Vermont Law School, Board Member of Free Speech For People, and co-counsel on the letter to the New York attorney general.  “The attorney general can dissolve any New York corporation that conducts its business in a persistently fraudulent or illegal manner. A corporate charter is a privilege, not a right. It’s time to explore dissolution.”

“New York gives its Attorney General special powers for cases of rampant corporate fraud. Those powers go back centuries in England, and New York attorneys general have used them recently. They are especially appropriate for this case. We have more and more evidence that the Trump Organization is built on a foundation of fraud. The question is just how far that fraud goes, and we need the New York Attorney General to help the public find out through civil investigation,” said Jed Shugerman, Professor of Law at Fordham University School of Law and co-counsel on the letter.

“The Trump Organization must be held accountable for its repeated violations of the law. The evidence is overwhelming that this corporation is acting as a criminal enterprise. And, the time is now for the New York Attorney General to open an investigation into whether to revoke the Trump Organization’s corporate charter,” said John Bonifaz, the Co-Founder and President of Free Speech For People.

Free Speech For People sent previous letters to Acting Attoney General of New York Barbara Underwood, and former New York Attorney General Eric Schneiderman, detailing the long history of alleged illegal conduct by the Trump Organization, both before and after President Trump’s inauguration. This new letter provides new updated information for that investigation. (As a New York state court held in a previous case, violations of federal law can be grounds for corporate charter revocation because “[f]ederal law is as much a law of [New York] State as any specific law enacted by the State Legislature.”).

Free Speech For People is encouraging members of the public to sign a petition urging the Attorney General to pursue this investigation, and to contact her office to voice support.