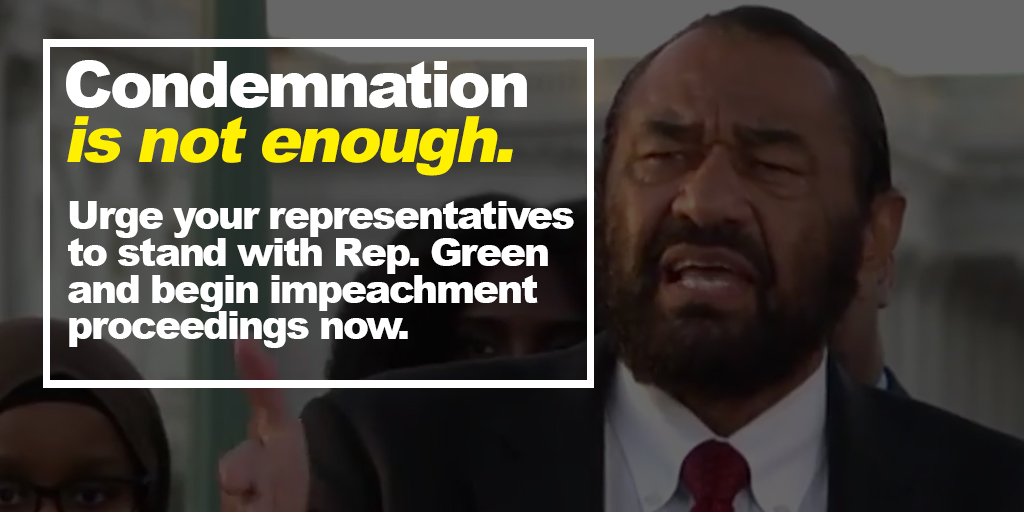 Representative Al Green of Texas just filed articles of impeachment against President Trump and plans to force a Floor vote in the U.S. House of Representatives on these articles in the next 48 hours.

Will you call your representative at (202) 224-3121 right now and urge them to vote to impeach Donald Trump?

Condemnation by the House of Trump’s racist actions is not enough. The president has a constitutional obligation to protect the citizenry against “domestic Violence” and “Insurrections,” to guarantee “equal protection of the laws,” and to “take care that the laws be faithfully executed.” Instead, the president, through his actions, is giving aid and comfort to white supremacists and neo-Nazis and he is undermining the constitutional promise of equal protection.

Trump’s racists attacks against four members of Congress this week is part of a dangerous pattern of providing aid and comfort to white supremacists in the United States. In August 2017, the president gave a statement after the white supremacist rallies and terrorist attack in Charlottesville, Virginia, in which he criticized violence “on many sides,” equating violent white supremacists with counter-protesters. He insisted that there were “very fine people” amongst the marching white supremacists. He bemoaned the firing of CNN commentator Jeffrey Lord for tweeting the Nazi salute “sieg heil.” This pattern of statements has been widely understood, particularly by the white supremacists and neo-Nazis themselves, as an expression of support.

Please call your representative today and urge them to stand with Representative Al Green and hold this president accountable through the impeachment process.